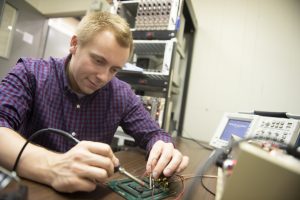 Development of advanced fast neutron detectors with improved detection efficiency, thresholds, timing and position resolution, and hit tracking capabilities is important both for basic nuclear science and for national security applications. In support of these goals, the CENTAUR collaboration is undertaking a research and development (R&D) project focused on neutron detection. The collaboration will investigate methods to construct a large-area detector made of p-Terphenyl – a solid organic scintillator with high light output, fast timing, and neutron/gamma pulse shape discrimination (PSD). The R&D work will focus on methods to build an array of many thousands of small (~1 cm3) p-Terphenyl crystals. In particular, the collaboration will investigate readout schemes which are able to identify the detector voxel in which the neutron interaction occurs, while keeping the total number of electronics channels to a manageable (and cost-effective) size. One such scheme is the use of alternating vertical/horizontal “light pipes” made of wavelength shifting material, to channel the scintillation light to photo detectors. This project will take advantage of the PSD-capable ASIC chips developed at Washington University, which promise to drastically reduce the overall cost of constructing a large-area neutron array with more than a thousand individual electronics channels. 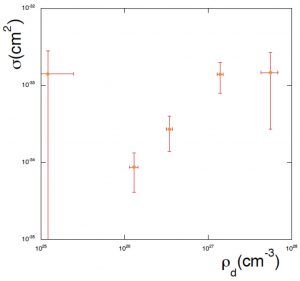 This figure depicts the average cross section as function of the deuterium average density from a 2016 experiment.

Nuclear fusion reactions from explosions of plasmas induced by the UT Petawatt laser-heated gas clusters (usually isotopes of hydrogen and 3He) are being investigated for astrophysical implications and possible applications in fusion energy, medical isotope production and compact neutron source development. These reactions provide an important diagnostic tool for probing the dynamics and thermodynamics in the plasma and understanding laser ion acceleration and neutron production mechanisms. In other experiments, using 8 nanoseconds laser beams to compress solid target, we study non-equilibrated, non-neutral plasmas at high densities. The experiments were performed at SGII-laser facility (Shanghai-China) on CD2 targets using eight laser beams (≈20kJ, 2ns) in cylindrical symmetry to compress the plasma[1]. The final goal is to measure fundamental nuclear cross sections at low and high particle densities. The quantitative measurement of these fusion probabilities in hot and dense plasmas will contribute significantly to our comprehension of stellar composition and evolution.

The astrophysical S*(E)-factors extracted from the THM for 12C+12C fusion. Panel (a): Black solid line is the S*(E) factor from [1] for the reaction 12C+12C –> p+23Na.Red dashed (blue dotted) line is our renormalized S*(E)-factor using the Coulomb distorted (Coulomb+nuclear distorted) waves. Panel (b): The total astrophysical factor, which is the sum of four astrophysical factors corresponding to four open channels. Notations are the same as in panel (a).

The main goal of this research is to provide new experimental tools for nuclear astrophysics by improving the theory of the low-energy nuclear reactions. He is currently working on advancing the Trojan Horse Method (THM) for resonant reactions with three charged particles in the final state. The resonant THM is a two-step process. The important feature of the new theory is developing of the method allowing one to include three-body final-state Coulomb interaction in the THM. It requires using the three-body Coulomb scattering wave functions and Coulomb asymptotic states. The paper A.M.M. and D. Y. Pang, “Astrophysical factors of 12C + 12C fusion from Trojan horse method“ is under review. In this paper we included the Coulomb distorted waves in the initial and final states of the transfer reaction andshowed that the results of the recent paper in Nature are misleading. Replacement of the plane-wave approximation (also developed by A.M.M.) by the distorted-wave approach drops the astrophysical factor by a factor of ~1000 compared to the Nature results. The group of Prof. G. V. Rogachev will perform a new THM experiment to determine the S*(E)-factors for 12C-12C fusion at the Cyclotron Institute. 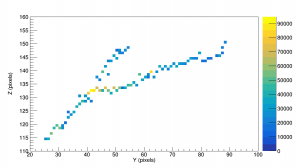 This figure depicts decay from the “Y” experiment.

The triple-alpha process forming carbon is an important astrophysical reaction that depends upon the properties of a resonance in 12C (the Hoyle state). Greater understanding of this process is complicated by the fact that these astrophysical reactions may also take place in a bath of neutrons. The cross section for neutron assisted de-excitation of 12C in the excited Hoyle state to the ground state is of great interest at astrophysical energies. 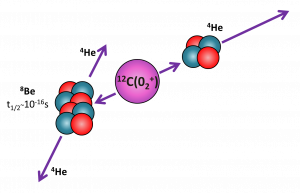 The decay schematic shows the decay mechanism oriented with the figure above.

Direct measurement of this reaction (or its reverse) is difficult because of typically high neutron background at neutron beam facilities. The experiment proposed by Lee Sobotka will allow this cross section measurement to be made over a wide energy range of neutrons by detecting the resultant alpha particles from the decay of the Hoyle state. TexAT, an active target developed by the group of Grigory Rogachev at Texas A&M University, offers the opportunity to detect the tracks of all three alpha particles, which make a characteristic “Y” track in the detector.